Like the rest of us, my desperate need for December 15th has reached DEFCON 1. The lack of a 2nd trailer, while we are officially into fall, is not helping matters in the least. So, I resort to what any superfan does in desperate times; speculate, and speculate some more. This piece will focus less on Snoke’s identity, God knows we have enough of those already, and more on his motivations, as well as Luke’s possible reason for isolation. Let me first lay down some of the groundwork that will build the foundation for this theory. What we know:

Ok, down to business. One thing that has been stuck in my craw is the idea that Luke just said, “fuck it,” and went into hiding out of despair. It just doesn’t add up for me, and it got me thinking about what other reasons there could be for his self-imposed exile. What if Luke isn’t hiding at all, but rather, hiding something? Protecting something, at all costs.

There must be some serious importance for this library shot to be featured so prominently in the first trailer. What book or books could be worth exiling yourself to ensure its protection? Only two come to mind for me. The Journal of the Whills, The Jedi Path, or perhaps both. The Jedi Path seems most likely simply because of the circumstances surrounding his school and what happened with Kylo. In the picture below, you can see the book has been badly damaged, perhaps in the attack that destroyed Luke’s school. But the Journal of the Whills seems more likely from the standpoint of Snoke’s desire for it, and there are a few mentions of Qui-Gon learning immortality from a Shaman of the Whills. Although this remains very vague, the journal is potentially extremely powerful.

Regardless, the idea that Snoke and the First Order are after what Luke is possessing rather than Luke himself just seems so much more plausible. Honestly, why would the First Order even give a shit what hermit Luke is doing in a cave on some island? Why wouldn’t they just get on with their agenda of galactic domination? Simple. Because Snoke needs that book.

If this is indeed the case, it could tell us a lot about Snoke’s true identity. But, as I said, we’ll save that for my upcoming installment titled, “If You Think Snoke is Mace Windu, We Can Never Be Friends.” 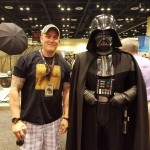