E3 is next week. The electronic entertainment expo, held each summer in Los Angeles, Ca, means a lot of different things to the gaming world. For many, it’s a time of wonder and excitement as new games are unveiled, and for others it’s a great time to be a cynic as the games industry collectively pats itself on the back for continually pulling the wool over the consumer’s eyes and rehashing tried and true ideas. For the booze-minded gamer, E3 always proves to be a great excuse to get drunk, with drinking games practically creating themselves.

Covering E3, even remotely, is a stressful experience for any writer. Once the convention starts in full, the video game floodgates are opened, with trailers, assets and announcements coming at a breakneck pace.

In a sort-of calm before the storm, mental preparation for the crazy few days that it is E3-type post, I’ve put together my completely uneducated guesses as to the biggest reveals that will be coming out of the LA Convention Center this year.

Bethesda Shows Fallout 4 Gameplay, No One Can Handle It

This is an easy prediction. After all, Bethesda already made a big deal about hosting their first ever E3 conference and last week’s Fallout 4 trailer confirmed that more details would be shown during the event.

“Do you see that wasteland?” He asks, staring intently at the camera trained on him. “You can climb it!”

The internet, foaming at the mouth from the second the words “Fallout” and “four” are mentioned in the same sentence, can no longer contain their excitement. As the first shot of the demo – a poorly textured dog – appears, Twitter and whatever other social media the kids are going on about these days, explodes, causing internet outages across the world.

Writers and consumers alike rush out hot takes and blurry screen caps, commenting on the “immersion” of the game. There are guns, mutants and ruddy textures. No one notices that Fallout 4 looks similar to Fallout 3. The demo ends, Todd Howard bows, throws up the illuminati diamond, and walks off stage.

“Idiots,” he mentions to no one in particular before noticing his microphone is still on.

In what will assuredly be known as the greatest move in Nintendo’s storied history, Reggie Fils-Aime announces “Inkopolis Crossing.” Capitalizing off of the already-established cult following of Splatoon and the gaming world’s obsession with dressing up cute characters, Inkopolis Crossing combines the art direction of their latest IP with Animal Crossing.

The game features tons of outfits, with the ultimate goal of the game being to prove to your neighborhood inklings that you are, in fact, the freshest squid on the block.

Sony Cements the Vita as a Legacy Platform:

In order to clarify and add context to the “Vita is a legacy platform” debacle, Sony announces that a new Legacy of Kain game will come out on the Vita every year until the handheld is discontinued.

Shuhei Yoshida apologizes for the confusion, reiterating that “The Vita is a Legacy of Kain platform.”

In an ironic twist of fate, the Vita is discontinued before a new Legacy of Kain is released. No one really cares.

Someone on Stage Makes a Bad Silent Hills Joke:

This is 100% guaranteed to happen.

Though Atlus has been very tight lipped about their E3 plans, the scoop-savvy reporters on the showroom floor catch wind of a planned Persona 5 demo. Rumors spread like wildfire, and the entire convention seems to begin nodding their head in unison, as if rocking out to a Shoji Meguro soundtrack.

After an hour of head bobbing and foot tapping, Atlus’ PR team calls for all in attendance to head to a darkly lit conference room. Once everyone is settled down, a cryptic red screen flashes and stylish text appears below, reading “Persona 5.”

Half of the people in the room shrug and get up awkwardly, lamenting “that anime shit,” and leave.

Seeing that there are free seats scattered throughout the room, Atlus suggests letting more fans in. In doing so, legions of fedora-wearing men suddenly appear, their hands all stuffed into the depths of their trench coats. Seats fill rapidly, but more fans keep pouring in. Eventually, order falls by the wayside and chaos reigns. The unfathomable stream of fedoras creates a mass panic, and eventually everyone in the room is trampled.

Only the neutral survive. Persona 5 is praised for its amazing soundtrack. 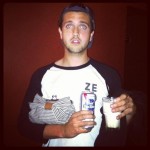 Raised on classic role-playing games, Ray’s eternal quest for the next great game has led to him playing everything he can get his hands on. With a passion for every facet of the video game industry, Ray aims to keep readers informed and entertained with every word he writes.

Fallout 4: “Being Strong” Cartoon is A Goofy Take on Super Mutants